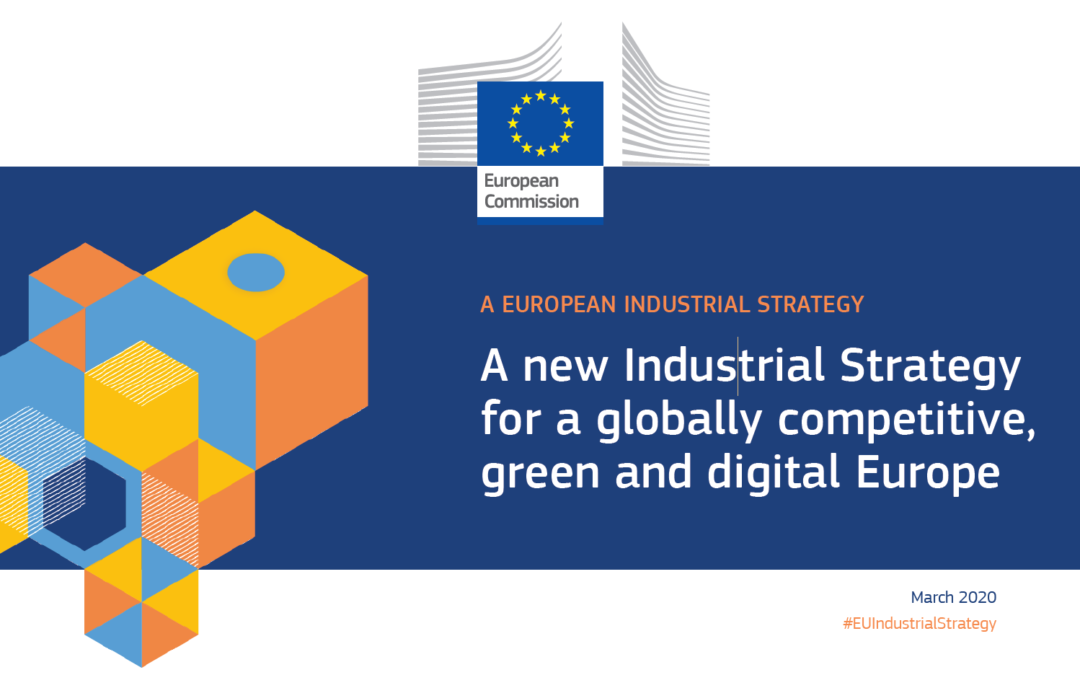 After days of negotiations, the European (EU) head of government has agreed on the new multi-year budget and a recovery fund of EUR 750 billion in response to the COVID-19 (coronavirus) crisis. To maintain its power as a bloc between the USA and China, Europe needs a joint industrial policy. On March 10, the European Commission presented a new industry strategy as a solution. Within this strategy, the Commission publishes a number of initiatives to support the transition to a green and digital economy — a new industry strategy for a globally competitive, green and digital European region. One of its key priorities is to achieve climate neutrality by 2050 and commit to preserving European companies’ competitiveness for the sake of preserving the EU’s global competitiveness. The Explanatory Memorandum to the Strategy states that the single market provides EU companies with a large domestic market, stimulating trade and competition while increasing efficiency. Better integration and functioning of that market can provide additional growth in many areas, such as in industrial goods where an additional growth of EUR 183 to 269 billion per year is possible and in services where an additional EUR 338 billion per year can be realized. These amount to an increase in EU GDP of about 12 percent.

While this sounds promising, this is a strategy that has yet to be worked out. Some initial questions include: How much time will this take and is there really a policy? And what is new compared to the industry strategy from 2017? Commissioner Vestager also asked this question herself, and replied that it has to do with the green and digital transition. But what this exactly means is not clear. She emphasizes that for the time being it is a strategy. But is this enough to counterbalance the USA and China?

China has had a policy in place for many years that should make China the most important trading power in the world. The first is the “Made in China 2025” strategic plan that was presented in 2015. The intention of this plan is that the Chinese economy can become largely self-sufficient in a dozen of high-tech areas such as the pharmaceutical, aerospace, and auto industries as well as in the energy, material, railway and information technology, maritime, biomedical, agricultural and robotics technology industries. China wants to be able to dominate all of these industries globally in the long term.

The other pillar on which China is heading to overthrow the USA is the “New Silk Road” and is also known as the “Belt and Road Initative.” Presented in 2013, this plan involves a trade network spanning three continents – Asia, Europe and Africa — which affects almost two-thirds of the world’s population and comprises of more than 1,000 billion in infrastructure investment by road, rail, and water.

China can finance this with trade surpluses. With Europe alone, the trade surplus in 2019 was 164 billion euro and, according to Jonathan Holslag in his book “De Nieuwe Zijderoute” (The New Sillkroac), trade surplus for the Silk Road was 1,4 trillion (1400 billion) euro between 2008 and 2018. Through this initiative, China is not only trying to become the major player in certain industries, as outlined above, but also expanding its sphere of influence. In Europe, countries such as Croatia, Greece, Hungary, Italy and Serbia, are open to participate in the project.

The participating European countries indicate that the Belt and Road Initiative offers opportunities, especially for poor countries. However, there are also objections that the participating countries are becoming too dependent on China and what that can lead to as we have seen in recent months with a shortage of masks, other medical products and raw materials from China. There is a call in politics — and also at the employers’ organizations VNO NCW and FME — for a joint European industrial policy to make a stand against China and the USA is getting louder. In my opinion, Europe can only counterbalance if it works together and develops a European industrial policy.