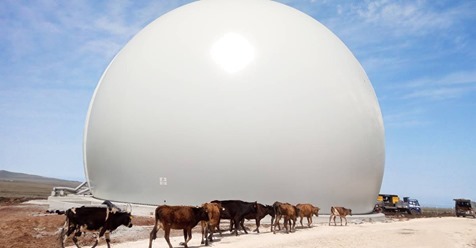 OLDENZAAL/GILDEHAUS – ‘The biggest one ever made’. The Oldenzaal-based company Flexxolutions presented its latest big project in the American style: the ‘Flexxosphere’, a biogas bulb with a capacity of 11,400 cubic metres. It is a huge ball made of foil, which is now located at two Turkish farms.

It’s like putting two bananas back-to-back together. This is how R&D-engineer Maik Hunder of Flexxolutions, which has its home base in Oldenzaal and a production site in Gildehaus, describes the difficulty of assembling the biogas bulb. It is assembled like a large balloon. Actually, it is two spheres in one”, explains Hunder.

An outer balloon and an inner balloon, which fit into each other. The gigantic size of the whole thing made this a nice, challenging job.” The biogas balloon, which has a price tag of over € 100.000, was given the futuristic name Flexxosphere. It is not just something to look at. It has been delivered to Flexxolutions’ customers, two large farms in Turkey. The biogas ball, a flexible storage station made of foil, can be used to generate electricity.

The construction that has been put in place must ensure that it can withstand all weather conditions. A colossus like this catches a lot of wind and is subjected to a large internal pressure. It mustn’t fall over, of course. That is what we have built it for,” says Hunder. All 35 production workers at Flexxolutions in Gildehaus were called in to complete the sphere. They were required to ‘roll up’ the foil, where each worker has to roll around 100 kg of foil at rolling the bulb together.

Normally we make products for the premier league. But this is the “Champions League in terms of foil products”, assesses director Martin Nieuwmeijer of Flexxolutions. Once it was ready, we felt a sense of pride. You just have to wait and see if all the pieces of the puzzle you put together will fit.

The sphere was designed in Oldenzaal, Netherlands and built in Gildehaus, Germany and is therefore a genuine Dutch-German production, according to Nieuwmeijer and Hunder. A few more figures. The biogas sphere is over 22 metres high, has an outer membrane weighing over three tonnes and, as mentioned, a volume of 11,400 cubic metres. How can you compare that with? Nieuwmeijer: “About four and a half Olympic swimming pools fit into 11,400 cubic metres. Speaking of colossal.