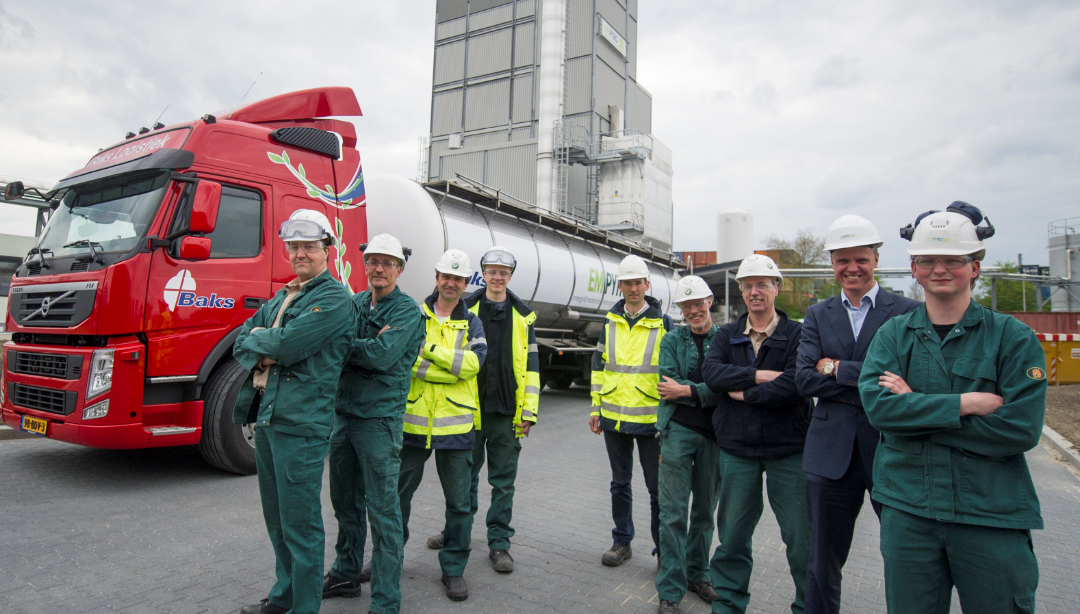 100 million euros to be invested in production of sustainable oil

Enschede, 2 April 2019 – Finland will invest €100 million in several stages in a new and sustainable Dutch technology that makes it possible to produce oil from various waste materials including wood waste. This technology was developed by a successful spin-off from the University of Twente and is used to convert waste sawdust from sawmills into fuel.

The initial investment of 25 million euros will be used for the purchase of a single production facility, but the client intends to purchase three more such facilities, bringing the total order to 100 million euros. A striking feature of the order is that the components of the prefab facilities will first be built in the Netherlands and then assembled in Finland on location. The construction of one facility in Finland will generates 100 full-time jobs in the Netherlands.

The project is being implemented by TechnipFMC’s office in Zoetermeer, a company listed on the NYSE stock exchange in New York as well as the stock exchange in Paris. The technology was originally developed at the University of Twente, and the commercial production facilities are supplied by the firm of BTG-BTL based in Enschede and member of the WTC Twente Energy Group. The firm of Seton, also based in Enschede, is responsible for manufacturing the core unit of the production facility.

The pyrolysis technology used by BTG-BTL was in part also developed with financial support from the Top Sector Program of the Ministry of Economic Affairs and is presently being applied successfully in the Empyro production facility based in Hengelo, where wood waste is used to produce oil to supply energy for the FrieslandCampina production plant in Borculo. The oil produced in this manner replaces ten million m³ of natural gas per year that would otherwise be needed, which is equivalent to a CO2 reduction of 24,000 tons per year, in other words the annual CO2 production of roughly 8000 Dutch households.

The company in Finland, which is managed by Green Fuel Nordic Oy, will produce 20 million litres of oil per year that will be used for various production facilities in Finland and the Netherlands. The pyrolysis plant will be located next to a sawmill in Lieksa, approximately six hours by car to the north of Helsinki. The waste sawdust from the sawmill serves as raw material for the oil production, and the steam released as a result is used sustainably for the internal plant processes. The pyrolysis plant is expected to open in 2020.

Oil in a few seconds

The technology used by BTG-BTL produces raw oil sustainably from natural waste materials via pyrolysis. In pyrolysis, raw materials such as sawdust or grass clippings are heated to approximately 500 °C in the absence of oxygen, resulting in the formation of raw bio oil. In nature, the process actually takes millions of years, but this technology speeds up the process so that it takes only a few seconds.

The oil produced in this manner can be used in various ways, for example to replace natural gas or fuel oil in industrial applications, but it can also be processed further to serve as fuel for cars, planes and ships. Since the entire production process is based on the use of waste materials as raw ingredients, no extra trees need to be cut down and no extra agricultural land needs to be used to produce the raw materials.

‘We can honestly say that we’re talking about “non-fossil non-food” oil’, explains Gerhard Muggen, managing director of BTG-BTL. ‘Our oil is an excellent alternative for fossil fuels and does not require the exploitation of agricultural land or forests. It really is a sustainable form of energy. The contract with Green Fuel Nordic Oy is an important step in the international rollout of our technology and proves that clients believe in the potential of pyrolysis as a source of renewable fuel. We are very happy that a country such as Finland, which is a leader in the area of sustainability, has chosen to deploy our Dutch-sourced technology.’

Muggen expects the demand for pyrolysis oil to grow very quickly. ‘Over the last few years, various types of advanced biofuels have been competing with each other in the market. Pyrolysis oil has proven itself to be one of the most competitive and attractive options. I expect other orders to soon follow from other countries, and I think major oil companies will also become involved.’

More jobs
Minister Eric Wiebes of Economic Affairs and Climate has the following to say. ‘This contract shows that energy transition can generate a great many jobs for people in Lieksa as well as in Enschede. This agreement is also an important step on the road towards a more sustainable refinery sector. We encourage businesses to increase the share of sustainable raw materials used in their energy consumption. That is also why the Top Consortium for Knowledge and Innovation (TKI) BioBased Economy, which is part of the Top Sector Energy, is involved in the development and realisation of this technology. The collaboration between TechnipFMC, BTG-BTL and Green Fuel Nordic Oy will speed up the development and expansion of this promising technology on an international scale.’

Timo Saarelainen, CEO of Green Fuel Nordic, is proud of being able to start up the pyrolysis project in Lieksa. ‘I’m convinced that pyrolysis will play a very important role in the bio-based transition of the economy, and this production facility is proof of that. It is the first of a series of investments in future facilities.’

About BTG-BTL
The technology for the production of pyrolysis oil from waste materials was developed over 25 years ago at the University of Twente. In 1993, BTG took over its further development and scale-up. Fifteen years later, in 2008, BTG BioLiquids (BTG-BTL) was established, which works together with TechnipFMC in rolling out the new technology. With support from the European FP7 programme, the first production facility Empyro was opened in 2015 in Hengelo on the grounds of Nouryon – formerly AkzoNobel. In 2018, this facility was acquired by Twence and has been operating independently since then. In 2019, BTG-BTL and TechnipFMC were awarded the first international order for a production facility in Lieksa, Finland, which operates on the Non-Fossil, Non-Food principle.